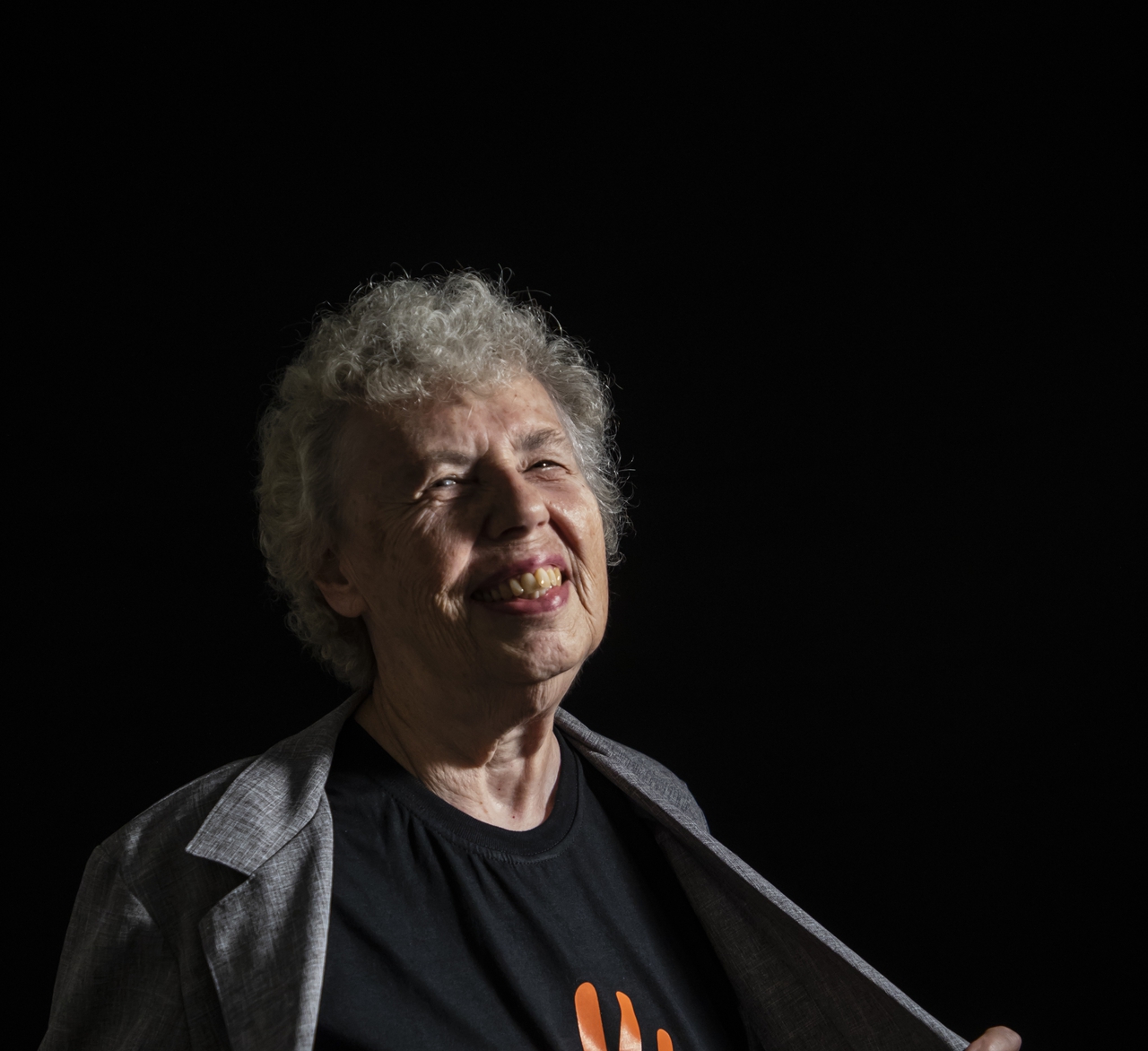 I am Sister Jean Schafer, a Sister of the Divine Savior, living in California where I have been involved in anti-human trafficking efforts for the past twenty years. My first conscious encounter with the concept of human trafficking was during a tri-annual meeting of the International Union of Superiors General (UISG) in Rome in 2001. The heartfelt discussion among the 800 members present exposed the global reality of women suffering under a myriad of forms of coercive exploitation. As the discussion continued, despite our differences in language, culture, race, ethnicity, ministry and religious dress, we realized we were united in one emotion and one conviction – that of a profound determination that we had to do much more to address this injustice and abuse. In an historical first public Declaration we UISG members stated in part: “Sent to be a living presence of the tenderness and mercy of God in our wounded world we publicly declare our determination to work in solidarity with one another within our own religious communities and in the countries in which we are located to address insistently at every level the abuse and sexual exploitation of women and children with particular attention to the trafficking of women, which has become a lucrative multi-national business.” For all of us it was a Pentecost moment that spurred us to solidarity and action!

Thinking back I realized, prior to that meeting I had encountered instances of human trafficking in my travels to witness the work of our sisters in the 27 countries where we ministered. But I had never put the term “human trafficking” to what I had seen. Hence began my journey into deeper awareness and deeper commitment to do what I personally could and to motivate our Sisters to also bring about justice for victims of human trafficking.

Our Salvatorian Congregation took up this focus as did most of the other congregations in attendance at that 2001 UISG meeting. The results over these years has been amazing proof of the solidarity among women religious at the global level. Talitha Kum - a network of networks - is testimony to that determination to collaborate to eradicate human trafficking. Today TK is comprised of 44 National Networks (9 in Africa, 11 in Asia, 15 in America, 7 in Europe and 2 in Oceania) and 7 regional coordinations (2 in Latin America, 3 in Asia, 1 in Europe and 1 in Africa). Everywhere religious sisters work together to educate people, to assist victims, and to pressure governments to enact laws to eradicate trafficking. Talitha Kum members inspire me to keep forging ahead in anti-trafficking efforts, knowing that, by being a global force, we are much more visible, credible, and effective.

Working to reverse human trafficking, recognized as the second largest global crime, is a challenging enterprise since it is grounded in power, misogyny, and capitalistic production /consumption principles. Traffickers use all the tools that society has available to further their cause of exploiting persons in order to make a profit and evade arrests – business supply chains, internet service providers, investment options, legal loop holes, etc.

My work began with the simple idea of beginning a free monthly e-newsletter that would spread awareness of the reality of human trafficking in all its forms and provide opportunity for people to do something to counteract it in their own locale. I titled the newsletter ‘Stop Trafficking!’ and used the image of the traffic light to feature awareness (red), advocacy (yellow), and action (green) as the three means to get involved. Each issue features a theme with appropriate articles to educate the reader. The newsletter, begun in August 2003, continues today 18 years and 216 issues later with a wide readership. It has proved itself a ready-reference for people as they spread understanding of how complex and dangerous human trafficking has become. I handed this work over to another member of the U.S. Catholic Sisters Against Human Trafficking (USCSAHT) in January 2020. One can access all issues at this web link: https://sistersagainsttrafficking.org/stop-trafficking-newsletter/

S. Sheila Novak, another Salvatorian, and I moved to California in 2003 to begin our efforts at raising awareness about human trafficking. Most people in those days thought this was a remote crime occurring primarily in other countries, like Thailand and Mexico. We gave presentations wherever we could, urging people to realize it is a crime “hidden in plain sight,” to learn the “red flags,” and to know how to report what seems suspicious. Even local law enforcement personnel were often unaware that this crime was present in their jurisdictions. Eventually the realization that partnership between social services agencies and law enforcement was the necessary approach for finding victims and gaining information from them about the perpetrators. Thus local, state and national coalitions formed, which now often include professionals and ordinary citizens, collaborating to fight human trafficking and effectively aid its victims.

Over and over as we gave presentations we also heard that housing for victims was a missing or insufficient piece in the mix of anti-trafficking approaches. So we Salvatorians founded a home for adult women victims. We called it Hope House and operated it for eight years before handing it over to another faith-based group who carries on the ministry today. We received women through law enforcement or social service contacts. The women were U.S. citizens or foreign nationals from countries in Eastern Europe, Asia, Africa and Latin America. Some of the women were victims of sexual exploitation in street prostitution or through escort services. Others were victims of labor exploitation as domestic maids or while working for construction companies. Some were estranged from family and children while others were unmarried and striving to make money for families back home. Education became one important goal for most of these women since it was a lack of education that had put them in situations of risk. Learning English was also a significant step for those from other countries. Our role was to provide a safe and homey environment in which to heal and take steps toward self-reliance. We stressed family-like support and modeled good home making skills, as well as provided recreational outlets, hobbies and other life skill opportunities. We made use of agencies in our local area for psychological, medical and legal services.

Still today we are in touch with women who had lived at Hope House for one or two years. Several have married and are raising families. Several have gained U.S. citizenship and have stable jobs and housing. Some have been reunited with their children. Others we have lost touch with. There are painful memories of women who spent time with us but felt the pull of former boyfriends, which we fear led them back into further sexual exploitation. A sad memory is of one woman who panicked after only three hours with us and insisted that she had to leave. I drove her to the commuter train and watched from a distance as a man met her and took her away in his car. I often wonder where she is today and what caused her to be so afraid to stay with us, despite her social worker’s conviction that she was ready to move into a healthy future. We have memories of many happy and touching moments as well. There were times when significant achievements were reached such as graduation into the health profession or the day one holds her own citizenship certificate. One moment I will never forget was when a woman was reunited at the airport with her daughter whom she had not seen for eight years. Today mother and daughter are both citizens, working and attending local college in the nursing field. Several women, once stable, became professionally involved in anti-trafficking efforts themselves. One became a staff person at our own former facility.

Having reflected over the years about how human trafficking harms women in so many different ways I came to realize the inner strength it takes for someone to fully heal from her trauma and be able to move forward in life. We have come to refer to these women as survivors and I see how apt that title is! As their advocates we can only do so much by way of providing support and resources. Ultimately it is an inner spark that enables a victim to grow into a survivor and further into a thriver. It is a privilege to watch and facilitate that journey, unique to each woman. Witnessing their healing and progress is my impetus to push forward in any way I can and stand with these women as an advocate for the rights they were deprived of through exploitation. The recurrent challenge is to convince people that they too can make a difference by educating themselves and getting involved in preventing this crime from continuing.