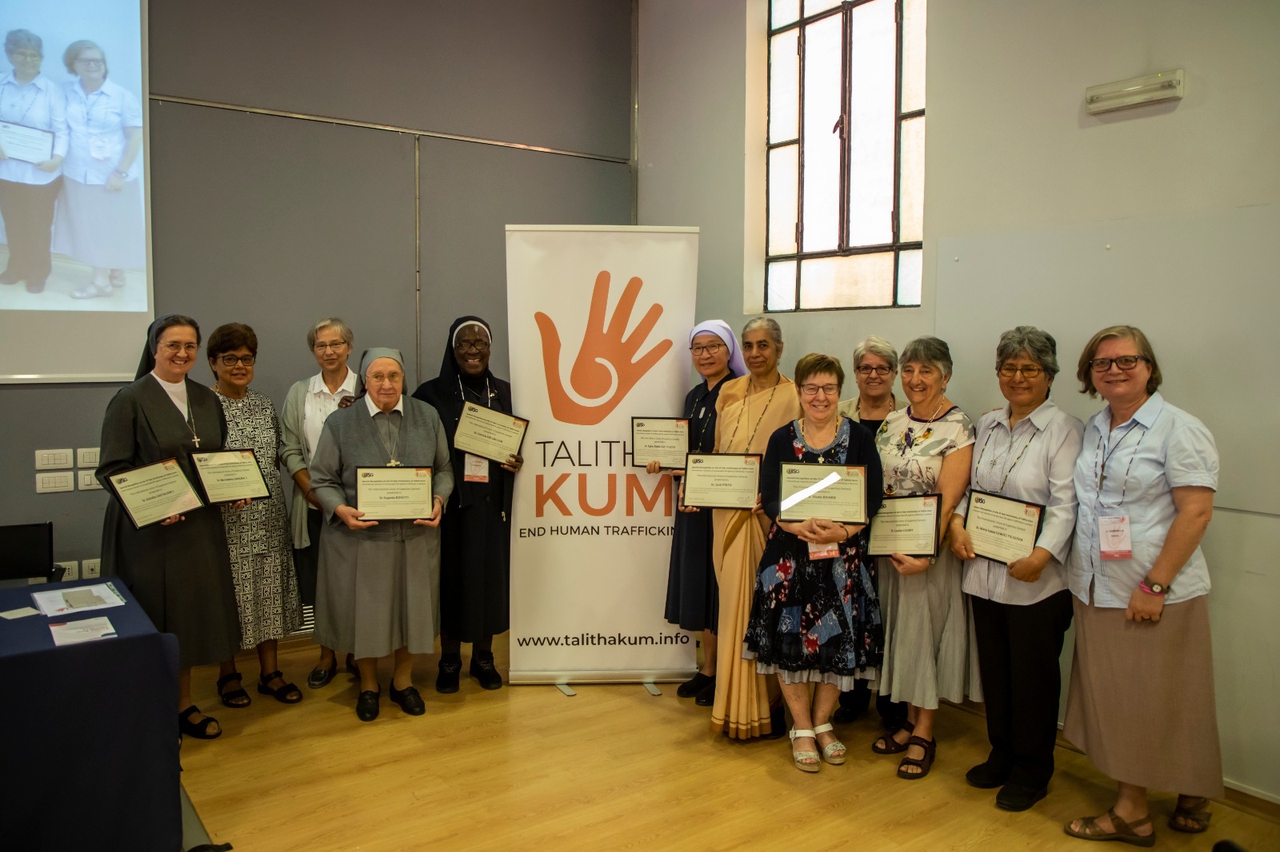 In 2018 Talitha Kum helped over 15,500 survivors and involved about 235,000 people in prevention activities worldwide. Pope Francis: “Keep it up!”

“Together against trafficking: weaving a network in love.” This is the theme of the general assembly held in Rome at the end of September that gathered eighty-six women religious and other leaders from all over the world, united by the desire to seek paths of freedom and justice, and by the commitment to Talitha Kum, the international network of consecrated persons against human trafficking. It is a project of the International Union of Superiors General (UISG). Ten of them were honored for having distinguished themselves from the very beginning of the network, succeeding in inspiring others and in making the network become international.

The eighty-six delegates discussed the realities of trafficking in different countries and together they approved the strategic vision that will guide the work of Talitha Kum in the coming years. On Thursday, 26 September, Pope Francis received the delegates and staff, offering his support and encouragement. At the end of the private audience, the sisters donated to the bishop of Rome an icon from Syria, created by the artist Nemat Badawi with fragments of the ruins of Aleppo.

“I congratulate you on the important work you are doing in this complex and dramatic field. A work that unites the mission and collaboration between the institutes [of consecrated life]. You have chosen to be at the forefront. Therefore, the numerous congregations that have worked and are working as the  vanguard of the Church’s missionary action against the scourge of human trafficking deserve gratitude”, declared the Holy Father during the private audience on 26 September in the Vatican, in the Sala del Concistoro, in the Apostolic Palace. He then added, off the cuff: “Working together like this is an example. It is an example for the whole Church, also for us: men, priests, bishops... Keep it up!”

“We celebrate the value of every human gesture, however small it may be. We celebrate the generosity of those who support the projects. Let us celebrate how well God has manifested Himself in all this,” declared the President of the UISG, Sr. Jolanta Kafka.

“Women are a resource for humanity, we have equal dignity and we would like this to be recognized by the Society and the Church”, said Sr. Gabriella Bottani, international coordinator of Talitha Kum. “For the future we perceive the challenge of the sustainability of the network: qualified human resources and economic resources for the various activities, whether they be reception, prevention or training.”

The data give us hope. According to the statistics emerging from the Report 2009-2019, published by the Pontifical Gregorian University (Faculty of Social Sciences, G&B Press, Rome, 2019) on the occasion of the meeting, it appears that in 2018 alone Talitha Kum helped over 15,500 survivors and involved about 235,000 people in prevention activities. This is an increase, as the total supported over ten years reaches about 100,000 people. The number of networks is also gradually increasing: at the moment there are fifty-two networks in ninety-two countries on all six inhabited continents and in the coming years three new openings are planned in Mozambique, Tanzania, and Taiwan.