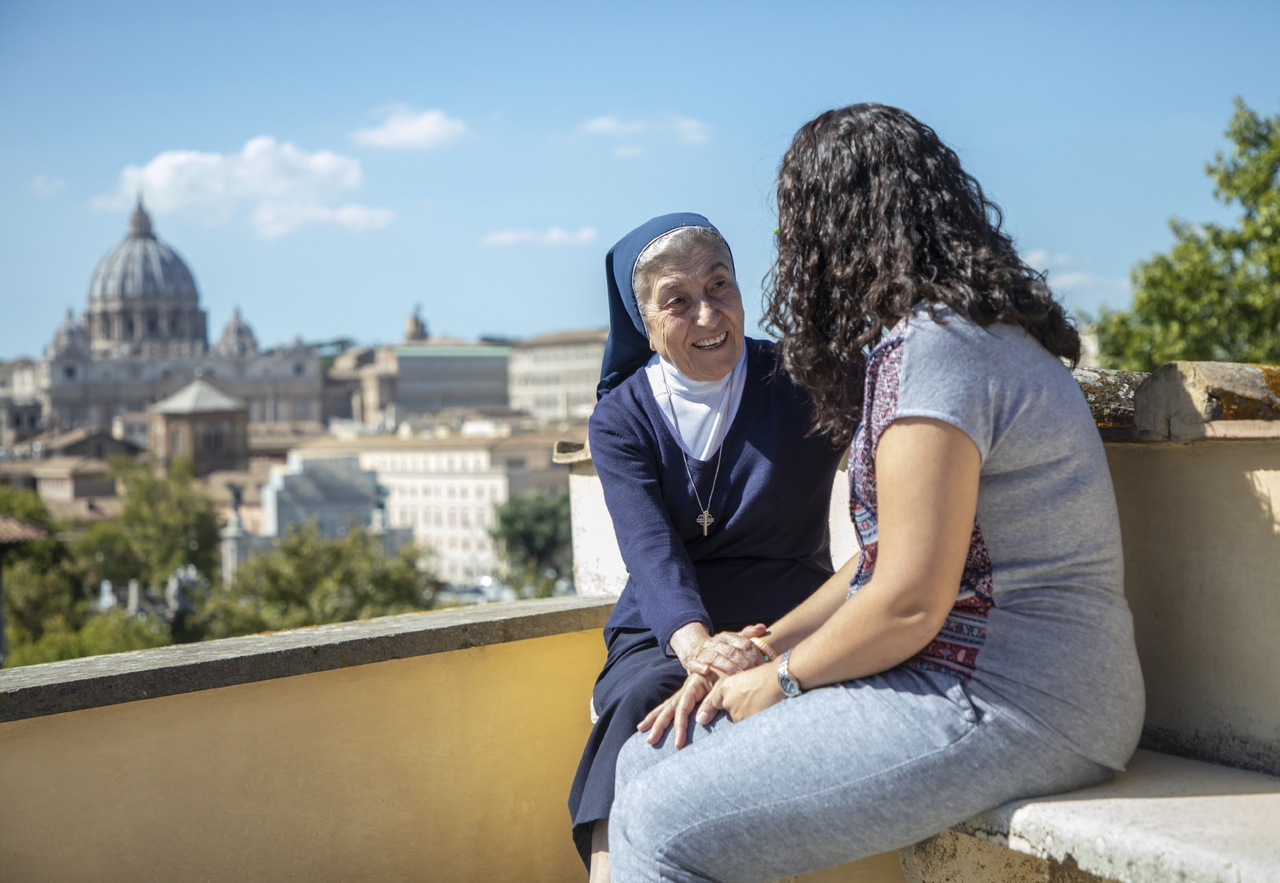 I am Sister Marie Claude Naddaf, religious of Our Lady of Charity of the Good Shepherd and regional coordinator of Wells of Hope in the Middle East. First of all I would like to point out that the Talitha Kum network, which arises from the Assembly of Superiors General (UISG) is a sign of the times, a prophetic call for the Consecrated Life of our time. What mission could we carry out in the footsteps of Jesus the Good Shepherd if not that of going in search of the sheep thrown into the peripheries of the world? Being a good Samaritan who stoops and heals victims of various types of exploitation as a result of this hateful and lucrative commodification of our time?

I consider that working against human trafficking is a blessing for me, allowing me to look into the peripheries of our world and be a life awakener in the darkness of so many people . Working against trafficking is a passion that embraces all my faculties, abilities, thoughts, words, and puts my whole being at the service of this cause. It means promoting prevention at all levels of society by limiting any kind of sexual exploitation of women, girls, abuses that harm the most vulnerable and to prevent and limit early marriages. Prevent the dangers and exploitations of working children, street children, especially at a time when poverty reaches about 70 percent of the population; denouncing those who hire these children means conducting awareness and prevention campaigns in the poorest and most popular neighborhoods and refugee and displaced persons camps to combat organ trafficking. Strengthen the local, regional and international network to report traffickers. Establish personalized programs for the protection of victims and survivors through material, psychological, spiritual and legal support for victims and for those unable to pay their expenses. For those who remain in the country, our network provides training and rehabilitation programs for victims and vulnerable groups for their reintegration into society.

The situation created by the COVID-19 pandemic, confinements, lack of resources, violence in families , the phenomenon of women and children fleeing to escape these situations make people more vulnerable and easier prey for traffickers and exploiters. This whole path is taken from an incessant prayer asking the Lord for the spirit of wisdom and discernment to save and empower the victims.

THE CHALLENGES : In some regions in our countries the problem of trafficking is a taboo, there is even a refusal to recognize and to know the presence of this scourge in our societies. This situation limits our interventions and the carrying out of our activities in public places. Early and forced marriage is a reality rooted in the mentality of certain families, especially in a patriarchal society. In our countries, the lack of job opportunities to support the family forces children into the labor market to ensure their daily subsistence, we have no alternative to protect them and provide for some of their basic needs. to this, it’s added the indifference of our societies in the face of the phenomenon of trafficking, also perceived in the local Churches and among religious congregations. The inability of our countries to develop national policies and concrete actions to combat the phenomenon, as well as wars, violence, immigration. We deplore the policies of the great nations that claim to fight against human trafficking and in turn impose sanctions that affect the poorest population.

Share some of your experiences with the victims and survivors of human trafficking.

We have experienced many moments of joy and hope, of successes, women and girls who have been recognized in their dignity and self-esteem, many children who have had the joy of living moments of conviviality in almost all regions of Lebanon. I would like to share with you two amazing experiences of young women who went through the path of servitude and slavery:

Zahra T. She is a young girl hired by a man who supposedly wanted to help her family by finding a job for their daughter: travel plan, placement in a rich family, everything was settled until the day when the silence s 'is installed, no sign of Zahra's life, a drama that lasted ten years. One day, Wells of Hope in Lebanon received a call regarding a young girl who has been missing for ten days, a request for help with vital information on how to find her in our great region. Thus began research at all levels, the exchange of information, networking at local, national, regional and international levels with the collaboration of several embassies. After 6 months, we managed to find her, we helped her with the documents and the plane ticket, and finally, with a lot of gratitude, Zahra joined her mother, who greeted her saying: "Thank you. Lord who gave me life by the return of my daughter, I am happy to have found her. Now I can die in Peace!"

Hassan H K. Who suffered exploitation, slavery and violence since the age of 6. After the death of her mother, she was sold several times to other men and to different countries through arranged marriages, where the father made money on his daughter. During one of our awareness workshops, a stifled sob drew the attention of the session leader who recognized her as a person in need of help and support. At the age of 25, Hassan was able to begin her journey to a better life. She received material, psychological and legal assistance for three months and we are happy to now see a face full of life and eyes that shine with joy. This rehabilitation and training program allows her to reintegrate into another region, and allows us to witness a woman who has regained her dignity and her self-esteem.

What are the values ​​that you have learned and what you carry in your heart? What does being part of Talitha Kum mean to you?

Talitha Kum is a specific charism of our time, for the Church and Consecrated Life, to spread the solicitude of God to all men and women without discrimination, to bear witness to the tenderness and compassion of God for all the victims of this scourge, to open a path of hope towards a better world. I firmly believe in the dimension of incessant prayer and intercession to support these people. I would like to make an urgent appeal to all religious congregations and to the Assemblies of our Major Superiors to give the possibility to other sisters and brothers to engage in this mission against human trafficking, and to take care of victims. May it be for the glory of God and the salvation of all peoples.