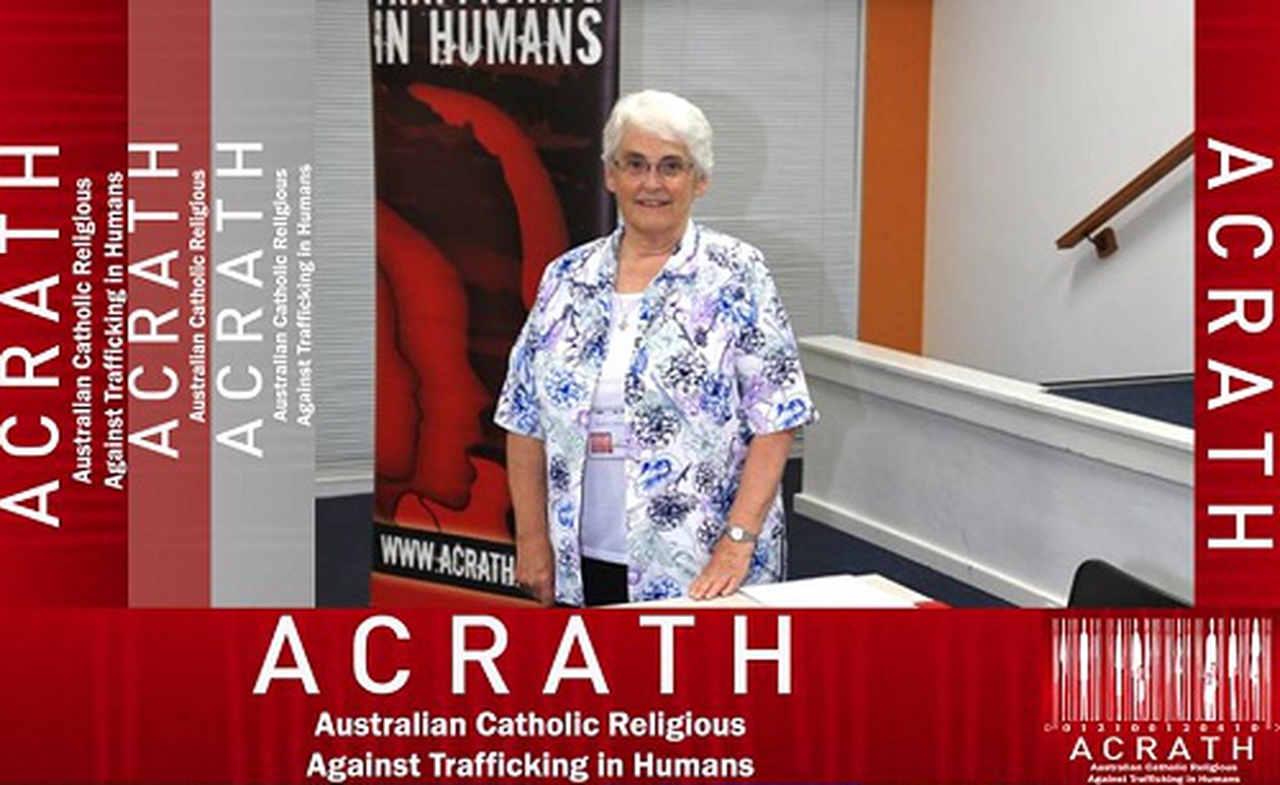 Noelene Simmons knows her commitment to work for the elimination of human trafficking is a long-term one; fortunately she is blessed with faith and hope. Involvement in ACRATH, one of Australia’s largest and most significant anti-trafficking organisations has taught her that change happens slowly, but with collaboration and determination, it can happen.

As the newly elected National President of ACRATH (Australian Catholic Religious Against Trafficking in Humans), Noelene is undaunted by the enormity of the problem. “We are in this for the long haul,” Noelene said after taking over as ACRATH President from Mercy Sister Anne Tormey, who retired after three years. “Things change little by little if we keep at it, working together.”

Noelene has taken over the national leadership of ACRATH after many years in the organisation as the NSW regional coordinator and the manager of the ACRATH website. In the past decade she has been immersed in human trafficking locally and on the global stage. Much of her experience and knowledge was captured in a recent Australian Catholic Social Justice Council publication, Human Trafficking and Slavery: A response from Australian Catholics. The paper, written by Noelene and Christine Carolan, ACRATH’s Executive Officer, looks at slavery and related crimes in the modern world; the Church’s teaching, and the international and Australian laws that deal with this abuse. The paper also discusses ACRATH’s work advocating on behalf of victims of human trafficking, educating Australians, and working alongside organizations here and overseas to shut down human trafficking.

Noelene finds inspiration daily in the women and men she works alongside in the anti-trafficking movement. But her early role models were the Marist Sisters who educated her in Sydney’s western suburbs. She was inspired by their spirituality and their ‘ordinariness’ and interest in the people they worked with and for. “They were really in touch with people and what was happening in their lives,” she said.

After joining the Marist Sisters more than four decades ago, Noelene taught in schools for many years before becoming the Province’s bursar. In 2010 she applied for and was appointed NSW ACRATH’s project officer. Her immersion in the anti-trafficking movement was sudden. Since that time she has worked on many of ACRATH’s key achievements including participation on Federal Government national roundtables and annual advocacy trips to Canberra to keep MPs updated on human trafficking and to seek policy change. She is also the OCEANIA representative on Talitha Kum, an international network of consecrated life against trafficking in persons.

“ACRATH keeps closely connected with a lot of international organisations and we share information and resources where possible,” Noelene said.

As President, Noelene’s focus is also on sustaining ACRATH’s work by finding funding sources. While the work is expanding, the funding base has diminished.

“We want to achieve what we set out to do so that people can live a full life. This means choosing what we focus on and collaborating with other groups working in this area. ACRATH has always shown a commitment to work with others who have similar asks and approaches and I think that is why we are able to bring about change,” Noelene said.

Human trafficking is an enormous global tragedy and sadly Australia is a player, a destination country for many people. As well, Australians consume goods made by men, women and children who have been enslaved or forced to work for little or no pay. So there is much to be done.

“Working in this area is a long haul and if you expect things to change quickly you will give up because you will have a sense of failure. We have to celebrate the small wins, the little steps forward,” Noelene said.

For Noelene, one of the best ‘wins’ in recent years was the visa framework reforms in 2015 that came after more than a decade of lobbying. The changes mean that people trafficked into Australia are no longer stigmatized by the names of their visas and they have access to services that assist them as they try to take up their lives again. As well, slavery-free chocolate was unheard of in Australia 15 years ago, now it is available in many stores, particularly in the lead up to Easter.

“I keep saying to people, it doesn’t matter how small your action is; just do it and tell others about it. Just take one step to counter human trafficking and change will happen.”