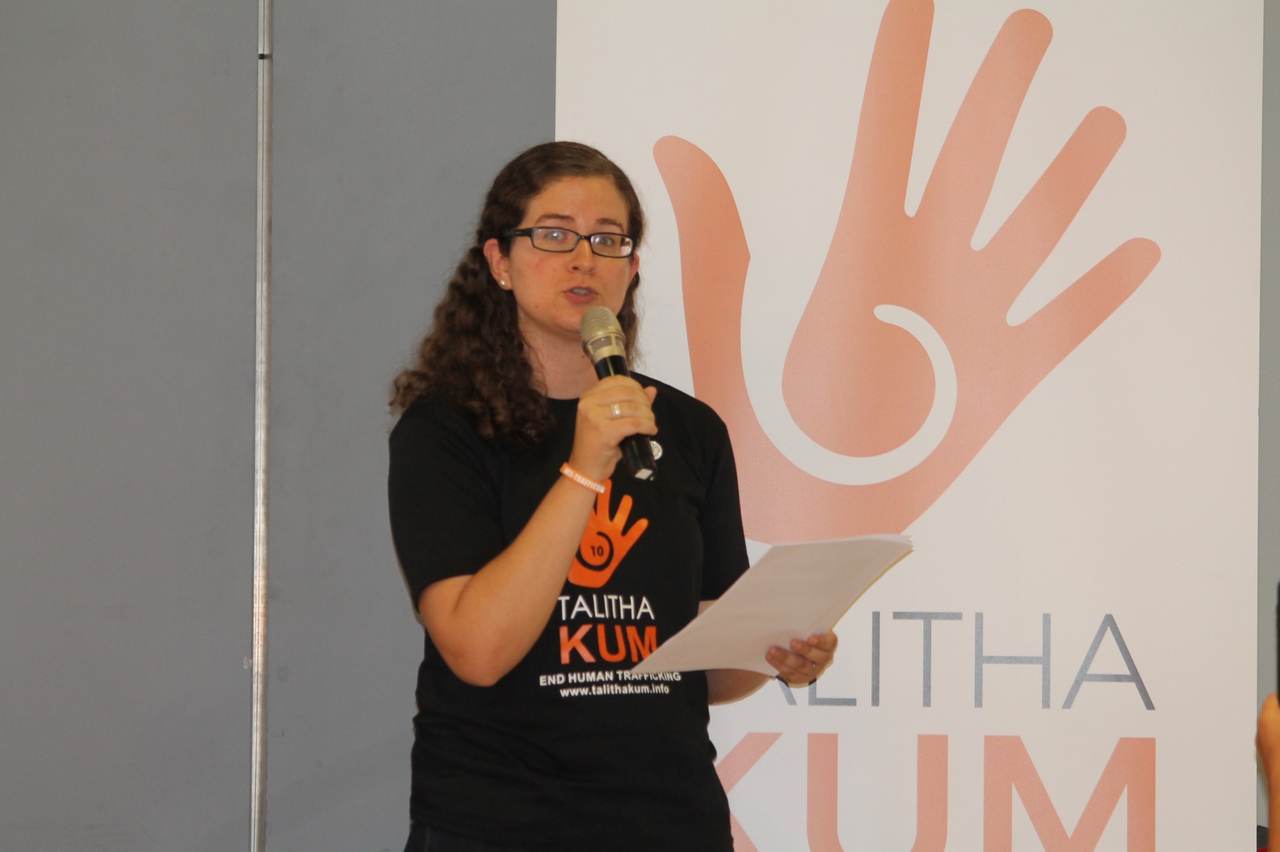 We, 86 delegates from 48 countries, representatives of 52 Talitha Kum networks committed to work to end trafficking in persons on all continents, gathered in Rome at the International Union of Superiors General in thanksgiving and prayerful discernment from September 21 – 27, 2019 to

•    celebrate the 10th anniversary of Talitha Kum;
•    evaluate the work done together according to the priorities set in 2016; and
•    define the priorities for Talitha Kum International to support anti-trafficking efforts for the period of 2020-2025.

Human trafficking throughout the world takes many forms. As members of an international network and followers of Jesus Christ, we hear the call to respond to the root causes of human trafficking which transcend national borders.  In order to live our mission and vision, we have identified three priority areas of structural injustice to address in the fight to end human trafficking.

First priority: The power differential between men and women in all sectors: economic, social, familial, political, cultural and religious.

We denounce the objectification and denigration of women that contributes to a global culture of exploitation and violence against women, reflected in human trafficking. According to the UN Office on Drugs and Crime, 72% of people exploited through human trafficking are women and girls. There are many forms of human trafficking including sexual exploitation,, labor exploitation, and illegal organ removal. When it comes to sex trafficking, females make up an even higher percentage of victims.

We call on the Church, as the Body of Christ and an example to society, to witness to the value and dignity of women and girls by promoting their proper role in all sectors. May this commitment be reflected within the Church by involving women in decision-making processes, especially on topics that impact them. We call on Episcopal Conferences, Religious Brothers and Sisters, and Diocesan Clergy and laity to collaborate with women as equals in order to transform the culture of domination and to support the networks of Talitha Kum in their diocese and local communities.  We call on governments around the world to ensure that law and policy promotes and protects the dignity and rights of women and girls.

We commit ourselves to empower one another as leaders in the fight to end human trafficking; to strengthen our networks’ inclusive model of working together; to stand in solidarity with all who are oppressed, especially women and girls; and to promote the dignity and equality of all people.

Second priority: The dominant model of neo-liberal development and unfettered capitalism creates situations of vulnerability that are exploited by recruiters, traffickers, employers and buyers.

We denounce this unjust economic model that prioritizes profit over human rights, creates a culture of violence and commodification, and decreases funding for necessary social services, putting people at greater risk of being trafficked. This also affects programs of prevention, protection, support, integration and reintegration of trafficked people.  We denounce the widespread corruption that allows this evil to continue.

We call on the Church to continue to use Catholic Social Teaching to critique social structures and promote economic and social justice. We call on governments to adopt just alternatives to the neo-liberal model of development;  to implement anti-trafficking laws; and allocate more funding for the support of long-term programs to prevent human trafficking and assist survivors in their process of healing to re/integrate into society. These programs should be created with input directly from survivors and those who work with survivors such as Talitha Kum networks.

We commit ourselves to just and sustainable economic practices within our networks.  We also commit ourselves to create spaces of interdisciplinary reflection, collaboration, and advocacy within the various ecclesial, interfaith, government, and international organizations according to Gospel values and Catholic Social Teaching.

Third Priority: Unjust and inadequate immigration law and policy coupled with forced migration and displacement puts people at greater risk of being trafficked.

We denounce the unjust immigration laws and policies rooted in a culture of racism and xenophobia which deny the basic human rights of people on the move. We denounce the dehumanizing political rhetoric which feeds hate, division, and violence.  We denounce the harsh immigration policy that drives victims of human trafficking into the shadows, making the work of identification of victims and prosecution of perpetrators more difficult.

We call on all Catholics and people of good will to take prophetic action consistent with Pope Francis’ call to pray for, welcome, protect, promote, and integrate migrants, refugees, and internally displaced people in order to prevent them from falling into the hands of traffickers. We call on governments to implement migration policy and border controls that prevent human trafficking and protect the safety, dignity, human rights, and fundamental freedoms of all migrants regardless of their migratory status.

We commit ourselves to work across borders and boundaries through our networks in order to ensure safe migration and prevent recruitment of migrants by traffickers during their journey and accompany them on their return.  We commit ourselves to use our collective voice and engage government officials to promote and enforce just immigration laws and policies.

We know that only by working in collaboration and solidarity, weaving a web in love, will we be able to confront the structural issues that cause and perpetuate human trafficking. As members of the global Catholic Church, we affirm the Pastoral Orientations on Human Trafficking and will incorporate its directions into our work. We invite everyone to join us in prayer for successful implementation of this important work to end human trafficking. Together, we will create a future filled with prophetic hope by working together, forming a network of compassion and grace!

The Assembly also set internal priorities to grow and strengthen our Network and deepen our impact in ending human trafficking. Talitha Kum in 2020-2025 will focus on improving our networking, communication, and formation resources and opportunities. We will prioritize work in education and prevention, survivor services, advocacy, and growing the network with priority in Africa and Asia.