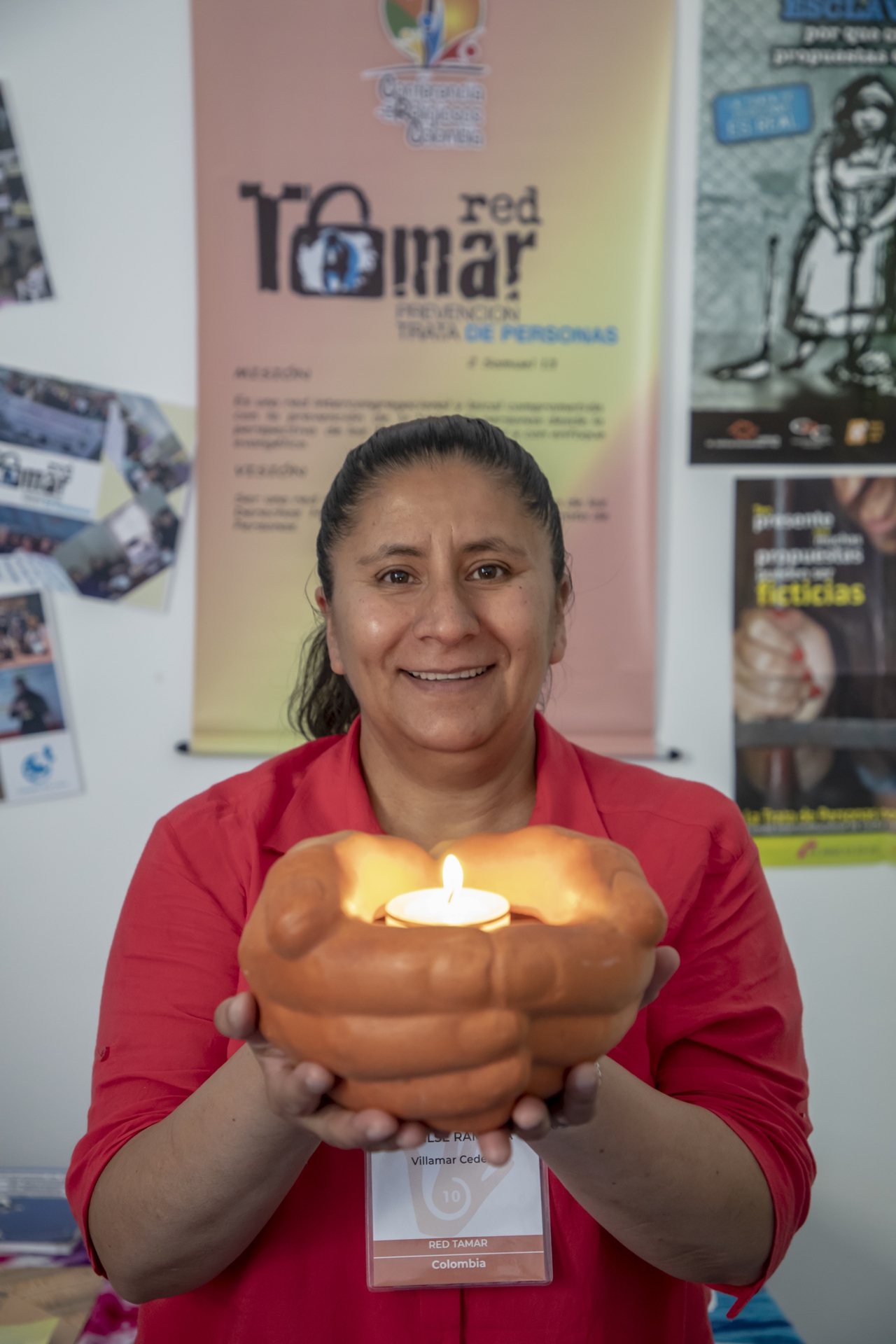 I am Ilse Villamar Cedeño, Ecuadorian, a religious of the Congregation of the Sisters of the Divine Will. I define myself as a cheerful and simple person, who enjoys feeling loved as daughter of God, which leads me to be sensitive to the pain of people.
I currently live in Bogota and coordinate the Tamar Network of the Conference of Religious of Colombia, a network focused on addressing human trafficking, where the Lord has given me the opportunity to serve one of the most vulnerable and invisible populations. Tamar Network defends the human rights and the dignity of all, being daughters and sons of God made in his image and likeness. I emphasize the richness of working in this alliance with religious, lay people and institutions with a common goal: the dignity of the person.

What do you think it means to work against human trafficking in Colombia and what are the main challenges?

For me, to work against human trafficking is to listen and respond to God's groan of pain before the cry of his people (Ex- 3:7-15), before the new slavery that affects girls, boys, young people, women and men. Our work includes activities of prevention and our visibility and accompaniment to the survivors and victims of this scourge.
As Red Tamar we have some important challenges:
•    The need to expand horizons and to reach the new geographic and existential peripheries;
•    The need to grow from the territories, from the branches with the cultural faces of our ethnic and cultural diversity, to reach places where state entities do not reach, in that deep Colombia where most cases of trafficking happen and remain in impunity;
•    To document and consolidate at a quantitative and qualitative level these situations of trafficking that will allow us to have a political impact and become an alternative for the victims and a valid reference for national and international instances, in the same way, to escalate before international entities, from the inside out, in overcoming impunity and complicity of state entities, so that the network is positioned as a reference in the fight against this crime.

Do you want to share with us any experience of your service with victims and survivors of human trafficking?

The most beautiful experience I have had with the women victims and survivors of trafficking is the faith they have in God, who despite everything they have lived through they continue to say: “God loves me, I am a beloved daughter and He has always been with me.” This makes them tireless associates in the prevention of human trafficking, to prevent someone from suffering what they have suffered.
The most painful experience I have lived was to participate in an event of the "Commission for the Clarification of Truth, Coexistence and Non-Repetition". One of the survivors, accompanied by Red Tamar, narrated in detail to the audience that she was a victim of sexual slavery, of massive rapes and a survivor of an impalement, martyrdom that she lived for 12 years; defining herself as: "I am a dead woman in life". She lived through it all in silence with fear since she lived in a paramilitary territory. It was very painful to listen to the stories of 30 cases of different types of sexual violence: some were narrated by the victims and others, for security reasons, were read by human rights defenders, officials from various state agencies and representatives of the international community accompanying the peace process, who at the moment of reading them, their voices broke with tears and they could not continue reading.
I remember that at the end of the event, I was getting ready to leave the place, when the woman who accompanied me from Red Tamar, escaped from the security cordon because she was a protected witness and called me shouting my name, I ran to her thinking that something was wrong, I asked her what was wrong and she answered: Sister Ilse, just give me a hug.
I didn't have time to react, she hugged me, her body trembled, and she repeated: “hug me sister, hug me sister,” while crying. I don't know how many minutes the hug lasted, but for me it was eternal; she held me so tightly that it prevented me from breathing and I felt her heart beating fast, which confirmed all the anguish and pain of what I had heard only minutes before.
As I embraced the survivor, I said to myself:” Lord, how can there be so much evil in human beings, if you have created us in your image and likeness?”

What have you learned in this process and do you keep in your heart?

Please, a final message
I have learned that in order to fight against the "trade of life or slavery of human beings", it is urgent that we articulate and join forces, as those in Religious Life, Laity and institutions, because alone we cannot break the chains to free the victims of human trafficking.