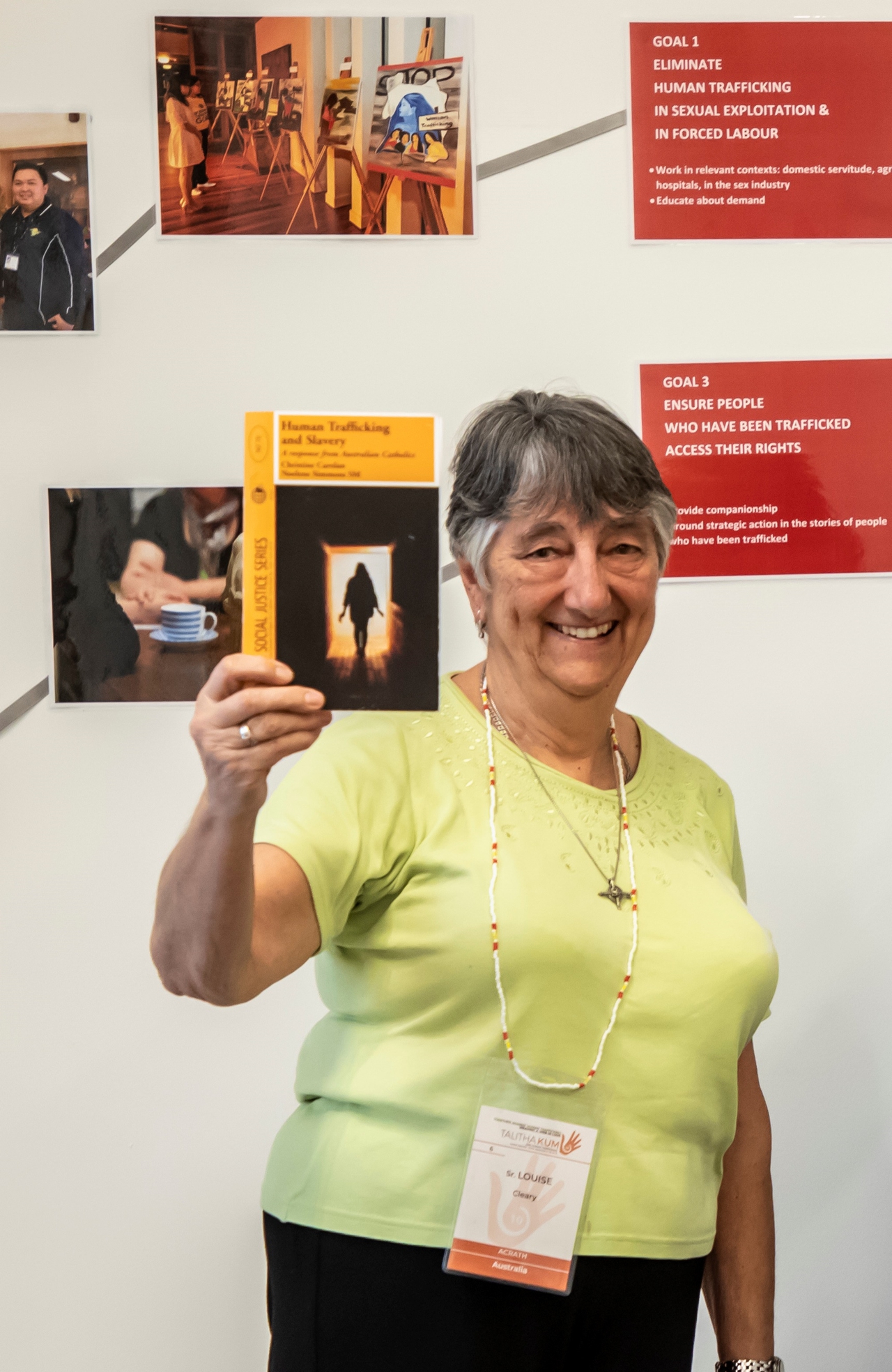 Testimony of Sr. Louise Cleary, president of ACRATH in Australia

Who is Louise Cleary and what is her experience as president of ACRATH  (Australian Catholic Religious Against Trafficking in Humans)?

I am a Brigidine Sister (Sisters of St Brigid founded in Ireland in 1807) and a member of the Victorian Community in Australia. Over the years my work has been predominantly in education at all levels, significantly working in areas of disadvantage. These experiences have educated me and given me a passion for addressing injustice. My work against human trafficking began in 2001 when I met young women in the detention centre and who had been trafficked into Australia into prostitution. ACRATH was established in 2005 and has worked since that time to educate about, and address, the changing dimensions of human trafficking and modern slavery: sham marriages, domestic servitude, labour trafficking, forced marriage and trafficking for prostitution. As a rich country, and an island, Australia should be able to eliminate these injustices. However the pressures of macro-economic policy, gender inequality, casualisation of labour and a prevailing sense of entitlement are global problems which drive these global ‘pandemics’.

What does it mean to you to work against human trafficking in Australia? In your opinion which are the main challenges- main opportunities?

ACRATH has taken a lead in making presentations and developing educational programs to inform the wider community, parishes and schools about human trafficking with the goal that knowledge is power and can lead to change if there is a more educated populace. ACRATH is a respected voice in advocacy with government as we bring grassroots knowledge and expertise to the table, and have a history of collaboration with like-minded partners. Patient and focused advocacy has led to changes in the visa regime, to conditions within the Support for Trafficked People Program, in the introduction of forced marriage legislation and the Modern Slavery Act and to some aspects of the Seasonal Workers Program. ACRATH’s Companionship Program for persons who have been trafficked into Australia brings a human and compassionate presence and practical support to very vulnerable people, largely women and children.

The challenges are numerous! One is funding our organization. Grant writing detracts from the time available to do the work. Funding is also needed for our sustainability: to employ more people as the number so of generous sisters who have worked for ACRATH retire. Meeting the increasing demands for support of people who have no safety net and are caught in labour or sexual exploitation is a challenge. Forced marriage is on the increase in Australia. It is a crime in our law, but this is not fully understood by some CALD (Culturally and Linguistically Diverse) communities. More education is needed in this space. It is also accompanied by the challenge of meeting the needs of young girls and women leaving a forced marriage, or threat thereof, and becoming homeless.

Please can you share with us some of the most beautiful and some of the most painful experiences during your work and accompaniment to women - children victims and survivors of trafficking, or vulnerable people at risk of being trafficked?

A lasting memory I have is the despair on the faces of young women in the detention centre facing deportation and of their disbelief in and fear of authorities, and their resignation to rejection by families and to being further exploited in their country of origin. In visiting a shelter in another country I was shocked by the dazed looks of three sisters, aged 7, 9 and 10, who had been trafficked to that city and were brought to the shelter by the police, and I was overwhelmed by the compassionate arms of welcome by other trafficked young women.

A challenging time was assisting a young fifteen year old who had been taken out of Australia and placed in a forced marriage. She bravely escaped and sought help through local and international means to return here. On her arrival back in Australia she was exhausted but resolute that this forced marriage could not proceed. The joy in this situation was that her parents were assisted to understand Australian law better and she was eventually reunited with her family and could continue her studies. Sadly, such a positive outcome is not always the case. ACRATH also supports other young women who have experienced forced marriage and whose mental health is precarious.  They are very much at risk with insecure work and the constant threat of homelessness.

What are the things you have learned and carry in your heart in this anti-trafficking work? What does being a part of Talitha Kum mean to you?

My personal interaction with trafficked people in Australia and overseas has taught me much about the resilience of human beings and of their capacity to find joy in the most awful of circumstances, and that small acts of kindness do matter. Anti-trafficking work requires patience as there needs to be a doggedness in trying to get systemic change. A long term view is also needed in walking with trafficked persons as they undertake the long journey of healing and of finding their voice – which is so powerful when that point is reached.

Talitha Kum is a great connector of the many national and in-country initiatives to address human trafficking. We can learn from each other and in some cases be a combined force for support individuals and groups of trafficked or exploited people. Recently ACRATH reached out to TK partner in South East Asia to give support to a young woman who had been repatriated. The sister involved has been the conduit for ACRATH’s financial and material support and of communication back with us. The more we build personal connections among the members of Talitha Kum the stronger we can be in our outreach, support and advocacy.

The courage of Talitha Kum in addressing the underlying drivers of human trafficking and modern slavery – neo-liberal economics, gender inequality and forced migration and the displacement of peoples - gives me hope. We have spent years attending the ‘wounds’ of human trafficking, and this will still be needed in our unequal world, but it is imperative that we build a groundswell of informed political opinion to change the status quo. We have a great advocate in Pope Francis! His leadership is invaluable.

Please send us a message

“I have come that ALL may have life” – we are the hands, feet, arms, heart and voice that must continue this mission.