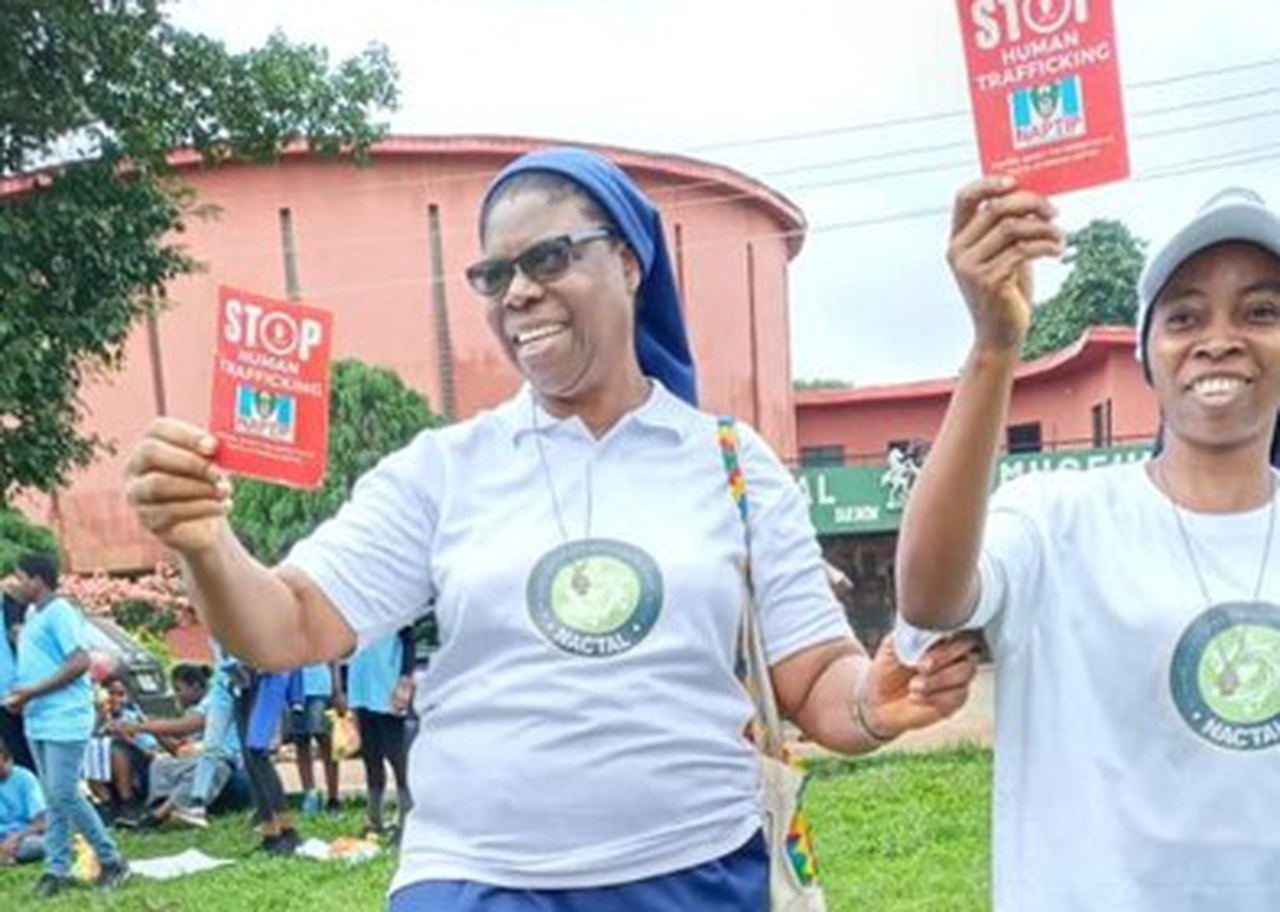 I am Philomena Okwu, a member of the Daughter of Charity of St. Vincent de Paul, an international group of Sisters in the Catholic Church founded by St Vincent de Paul and St Louise de Marillac in France in 1633 for the corporal and spiritual service of poor persons. My experience and involvement in anti-human trafficking activities started with the inception of the Committee for the Support of the Dignity of Women (COSUDOW) in 1999 as one of the founding Major Superiors. Later I carried the campaign against human trafficking to my missionary territory in Ghana, creating awareness in the region, schools, among groups, in parishes, etc. Now, as the present Coordinator of COSUDOW, the work continues.  Here in COSUDOW, we focus on prevention (public enlightenment and sensitization against human trafficking), protection (rescue, rehabilitation, and reintegration of victims of human trafficking), and prosecution of traffickers in collaboration with government agencies and other stakeholders.

What does it mean to you to work against human trafficking in Nigeria? What are your biggest challenges?

The more you fight this evil called human trafficking, the more it rears its ugly head. Human trafficking is the result of the mad quest for greener pastures overseas. It is fueled by poverty, unemployment, ignorance, gender inequality and violence, displacement of people, etc. Traffickers take undue advantage of these vulnerable situations to exploit human beings, especially women and children, for slavery and sexual exploitation. It is painful to see and experience human beings stripped of their human rights, battered and traumatized, and witness man’s inhumanity to fellow human beings. It is a venture that leads so many people to their death and renders others useless for life or leaves them as walking corpses. While some may recover, a greater percentage never fully recover their health, human dignity, and sense of self-worth. The end of this modern-day slavery is not yet in view and traffickers are still very elusive and perfecting their strategies.

When campaigning against human trafficking and irregular migration and emphasizing their harm and adverse effect, the question that is often asked is what other options are available for survival, to tackle poverty and unemployment, the root causes.

What things have you learned that you carry in your heart in this anti-human trafficking work? What are your most powerful takeaways?

My heart constantly bleeds with the untold destructive effect of human trafficking on the victims. Victims who broke down in the process with mental illness and debilitating illnesses such as HIV/AIDS may never recover, searching for a greener pasture and ending up worse off. It is also a disheartening effort made to help some victims go down the drain when they abandon the help and opt for re-trafficking, especially when repatriated and they feel shame that their dream had not been accomplished. My hope is that with synergy, stakeholders’ collaboration, partnership and networking might prevail against human trafficking in the end. I also expect the government to stand up to its responsibility to take adequate care of its citizens.

What does being a part of Talitha Kum mean to you?

Being a part of Talitha Kum International gives a sense of that belongingness and collaboration required worldwide to combat human trafficking from all fronts. It gives support, encouragement, and togetherness in the fight against human trafficking, a sense of collective responsibility that makes a difference, and focuses on the extermination of this heinous crime and scourge of our century.